Schooners like Red Witch could be seen a hundred years ago
sailing in the Great Lakes.

Red Witch is a sailboat called a schooner. She has two masts, the aft (rear) most mast being taller, and her sails are fore-and-aft rigged (like most sailboats you see). This makes her a schooner, and she’s based on a design by the famous naval architect, John Alden.

Named after the epic sea story, Wake of the Red Witch, by Garland Roark, her hull was laid by Nathaniel Zirlott in Bayou la Batre, AL in 1986, specifically for charter passenger travel. She is based on Alden design #716, and shares her design with schooner Keewatin.

The spacious salon features posters from the 1949 film, starring John Wayne and Gail Russell. Her dramatic deep red hull is constructed from mahogany over oak frames, with a Florida Juniper deck and cypress cabin tops.

Red Witch has enjoyed a long pedigree of charter sailing, beginning in Hawaii and San Diego, moving to the Great Lakes about ten years ago. She has also been a registered Exhibition Tall Ship, and was awarded flagship status at the State of Ohio”s Bicentennial celebration in 2003.

Red Witch was a participant in the Chicago Tall Ship Festival in 2003, 2006, 2010 and 2013. Red Witch is a member of ASTA, the American Sail Training Association, and has been used as an educational platform for traditional rig sailing and maritime history.

Skip back to main navigation

Have Questions? Visit our FAQ page!

As Seen in USA Today! 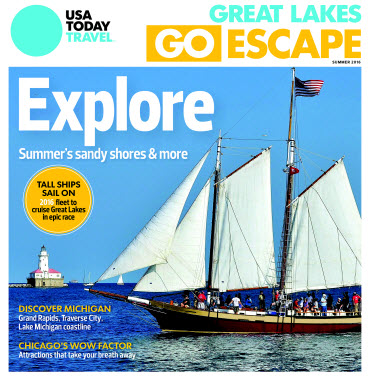